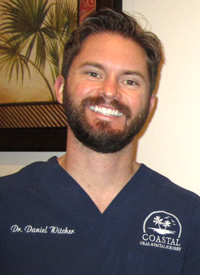 Dr. Daniel Witcher comes from a dental background, having grown up in Southern California with a father who was a general dentist and a mother who was a dental hygienist. He attended the University of Southern California for his undergraduate education, and the prestigious University of the Pacific School of Dentistry for his dental schooling. Following that, he was accepted into the United States Navy Oral & Maxillofacial Surgery (OMS) residency program, where he completed a General Surgery Internship and OMS residency right here in San Diego. During this world-class training program, Dr. Witcher learned state of the art surgical techniques in all aspects of oral and facial surgery, from dental surgery, to implant surgery, to complex facial reconstruction, trauma, and cosmetic surgery.

He then accepted active duty orders aboard the Nimitz Class aircraft carrier, the USS George Washington, based out of Yokosuka, Japan. After two deployments, Dr. Witcher returned to San Diego, where he was stationed with the United States Marines at the Marine Corps Recruiting Depot. He completed his board certification at that point, becoming a Board Certified Oral & Maxillofacial Surgeon, and discharging from the Navy to pursue a career as a private practice oral surgeon.

In addition, Dr. Witcher enjoys giving back to those less fortunate, having volunteered in surgical and dental missions to Fiji and Mexico, as well as participating in CDA Cares and the California Care Force. Dr. Witcher currently serves as the Treasurer for the San Diego County Dental Foundation, where he worked with other leaders of the San Diego dental community to build a dental clinic in the Veteran’s Village of San Diego in 2015. Dr. Witcher currently volunteers monthly at that clinic to provide free oral surgery for homeless Veterans. In addition, Dr. Witcher is on the editorial board of the San Diego County Dental Society Newsletter, and is a contributing author to the newsletter for the California Association of Oral and Maxillofacial Surgeons.

In his spare time, Dr. Witcher enjoys the outdoors, including running, hiking, biking, fishing, camping, and snowboarding. He especially enjoys taking his young daughter, Amoret, to gymnastics, ballet, and soccer practice on the weekends.  An avid sports fan, you can catch Dr. Witcher and his family cheering on the USC Trojans, Lakers, Dodgers, SDSU Aztecs, and San Diego Padres (as long as they’re not playing the Dodgers!).